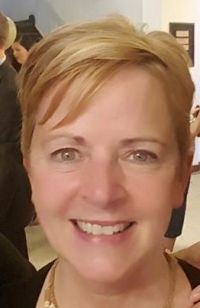 I was born at St. Mary’s Hospital in Kansas City, Missouri, in August of 1955 to Everett and Roylyn Worth.  I have two older siblings, Larry, who lives in Liberty and Evelyn, who lives in Mesa, Arizona.

I attended elementary school in Kansas City, Kansas, in the early 1960’s, I can remember having air raid drills and having to hide under my desk.  It was also a time of segregation when my best friend, Tonya, couldn’t use the same bathroom, drink from the same water fountain or swim at the same public pool as me. After school, she would come to my house and we would play all over the neighborhood until my mom would yell and yell at me to come in for dinner.

Our family moved to Olathe in 1966 when daddy quit the carpentry job that he’d had since getting out of the service. He went to work at a custom cabinet shop. After a few short years, he bought the shop and became a true craftsman of custom cabinetry.

I started my first job the day I turned 16 at Zarda Dairy in Olathe, scooping ice cream and pumping gas. (That was back in the day when service at a gas station existed!)  I can remember the gas wars and gas dropped to $.23/gallon – you could fill up your empty tank for $5.00.

After high schoo,l I went to work at a “figure salon” where I lead exercise and helped women with nutrition.  After two years of that crazy job, I went to work for an electronics firm where I worked as a receptionist for 4 years then became an administrative manager for Littion Tool & Die. After 4 years on this job one of my employees and 5 of her family members were murdered.  Three weeks later my boss passed away suddenly.  The company allowed me to transfer to Litton Electron Tube Division in Tempe, Arizona, so that I could be close to my parents who had moved there in 1973.  I only stayed there for 2 ½ years before moving back home to Kansas City.

I found a great job with MONY (Mutual of New York) in Overland Park.  I was there for 4 years and then my boss retired.  I decided to take a short sabbatical.   I had been home 3 days and a friend came over for a visit and asked if I knew of anyone who would clean her house.  I said I’d give it a try if she was okay with that.  The rest is history….. that was 29 years ago.

In 1995 I met my wonderful husband, Royan, at a party my roommate was having.  We were married in 1997 at a little chapel in Shawnee, Kansas. We lived in Shawnee until 2003 when we moved to Lawson so that I could be closer to my parents.  We were blessed with our beautiful, talented daughter, Kylie, in 1998.

I became associated with Westbrook Care Center in 2009 when I began the search for a place for my parents.  My mom had some medical issues and could no longer care for my dad in the manner to which he was accustom.  So, I needed a place for them where mom could recuperate and I knew dad would have his meals and some social interaction.  Westbrook was the perfect fit.

I started working for Steve and Amy in April of 2014 cleaning apartments.  I love being able to set my schedule and have fallen in love with ALL of my residents.

That is why it is going to be so difficult for me to say goodbye to everyone as Royan has been offered and has accepted a position in Washington, D.C.  Royan will be leaving the first of April and I will stay behind and continue working until our house in Lawson sells.

I love you all and saying goodbye will be so hard.  So if you see me crying in the halls, don’t worry about me. I’m just adjusting.  Royan, Kylie and I are all looking forward to this great, new and exciting adventure, I just wish I could take you all with me.