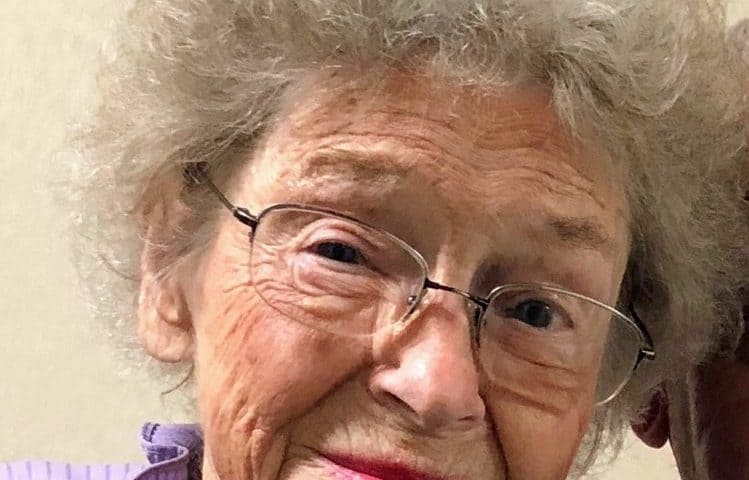 Betty was the youngest of seven children born to Buford and Nanny Boyer.  She was born in Stewartsville, MO.  When she was three, the family moved to a farm that was closer to St. Joseph, MO. Her father was a salesman.  They had pigs and cows on the farm for family use and her mom always planted a huge garden.  Betty attended a country school for 1st – 3rd grades which had a teacher who taught all eight grades.  Betty loved playing outside with her cats.  When she was eight, they moved to a farm even closer to St. Joe and she attended Pickett school for the rest of 3rd grade and all of 4th. Her favorite subject was math.   Betty would ride the hand plow while her older brother plowed the garden.

The family moved into St. Joe for a short time before relocating to Great Bend, KS.  Betty’s father got a job as a bookkeeper with a construction company which was building an air base.  Since the family didn’t have a piano, Betty’s mom bought an accordion and Betty started taking lessons when she was ten.  She loved playing it. She enjoyed riding her scooter around and hanging out with her friends.  She would also go fishing with her mother and a neighbor lady.

The family moved back to St. Joe as she was starting 9th grade.  She attended Central High School.  Her sister would go skating.  One night, she invited Betty and her date invited his brother to join them.  That was when she met Jerry Dewey.  She was fifteen and he was seventeen.  They started dating and did so for the next three years.  Betty graduated at seventeen from high school.  Because her mom wouldn’t sign for her, she had to wait until she was eighteen to marry.  Finally in December 1951, she and Jerry married.  His parents still had to sign for him because he wasn’t 21.

The couple settled into a house on Dewey Hill in Industrial City, MO. Jerry’s entire family lived around them – his parents on one side, one brother across the street, another on the other side of his parents and even his uncle lived there.  Jerry worked as a brick mason and Betty settled into being a housewife.  A year later their first child, Gerald Jr., was born. Eleven months later, Gloria was born.  Gale was born in 1957 followed by Garland in 1959.

Work was more plentiful in Kansas City, so in 1957 the family relocated to Kansas City North.  They decided to build a house near Claycomo down the street for the Worlds of Fun water tower.   The couple did all the wood work in the house included the hardwood floors.  Jerry build the fireplaces and did all the exterior brick work. They would take all four kids with them, light a fire in a fireplace, give them hot chocolate and then work on the house.  They moved into the house in 1960.

They became active members at Tower View Baptist Church.  She taught VBS and Sunday School.  Jerry would mow and do landscaping. They have been members for over 60 years.

After all the kids were in school, Betty went to work for H&R Block. She worked there for ten years before quitting to watch her grandchildren.

Jerry retired in 1994.  They traveled all over the US.  They still volunteered at their church and continued to be involved in the lives of their grandchildren.  Betty did water aerobics at William Jewel College’s Maybee Center three days a week.  They planned on their youngest granddaughter staying with them while she attended the local community college.  However on Father’s Day 2017, Betty had a stroke.  She was at her daughters and had baked the traditional gooseberry pies.

After the stroke, Betty was unable to cook and keep up with the housework.  In December 2017, Betty and Jerry moved to Westbrook.  She loves that she doesn’t have to cook.  She enjoys the people, those at her table and others around her.  She enjoys the activities especially the exercises, music and Crossroad Community Church service.

Betty is a strong proponent of being involved in church.  She believes that it unifies the family while helping you do missionary work.  Besides her four children, Betty has two daughters in law, two sons in law, ten grandchildren and twelve great grandchildren.