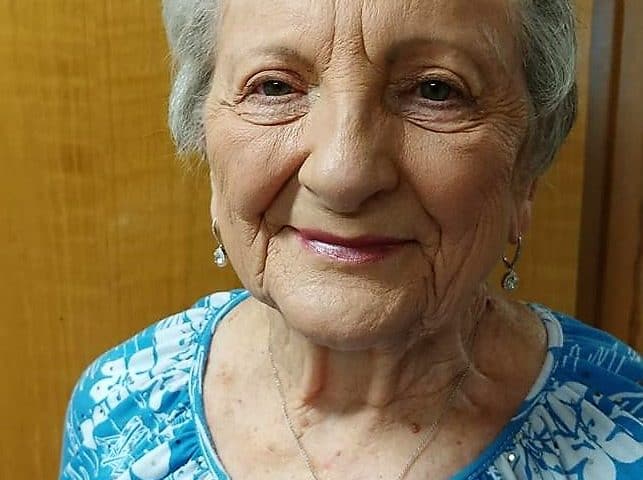 Carla was born in Madison, KS, to Carl and Charline Hanes. She grew up with an older sister and a younger brother.  Carla grew up living in the oil field camp where her dad worked. There were about fifteen houses, lots of kids to play with and just a mile outside of town. Carla started doing ironing and housework for other families in the camp at the age of eight.  By eleven, she had started driving in and around camp. She started working at a hamburger joint in town when she was sixteen and then moved on to work at the local drugstore working at the soda fountain.

Carla attended school in Madison and was active in high school.  She was a baton twirler with the band and her junior and senior year she was a cheerleader.  At a game one night, a young man caught her eye.  She asked her friend about him and told her she’d like to go out with him.  Don Esslinger was a college student home for the weekend. He lived on the other side of town and was four years older than her.  The couple started dating shortly thereafter.  Carla graduated from Madison High School at seventeen. She attended Venus Beauty Academy in Wichita and lived in the Methodists dorms, which was a mile walk each way. Carla graduated six months later, still only seventeen.

She worked at Newman’s department store in Emporia, KS, until her parents moved to El Dorado. Carla moved with them and worked in a beauty shop. Don graduated and went into the military (he’d been in ROTC)  Before leaving, he proposed to Carla.

Don was stationed in Fort Lee, Virginia  Since the couple didn’t want to wait to get married, Carla bought a car and she and her girlfriend drove to Fort Lee. Don and Carla were married in the Officer’s Club in April 1955.  She knew only three people at her wedding.

As they settled into married life, Don was sent to Louisiana and Carla went back to El Dorado for the few months he was gone.  Their daughter, Jetta, was born in 1956.  After two years, Don was discharged.

The couple moved to Salina, KS.  Carla did hair out of her home. Brad was born in 1958 and the family moved to Lyons. Don received a fellowship and the family moved to Washington, D.C. for a year.  Carla did hair and exchanged babysitting with other ladies in their apartment building.  After Don graduated with his Master’s degree, the family settled in Manhattan, KS, where Don worked with the college.  In 1963, their third child, Kristi, was born. Carla was busy raising three kids and working part time as a hair dresser. She also played bridge and was active in the Beta Sigma Phi sorority.

In 1969, Don took a job at MU and the family moved to Columbia, MO.  Carla took a secretarial course at Stephen’s College. After completing her course, she became a secretary at the First Baptist Church in Columbia.  She was there a few years but quit when Don was granted a year sabbatical in the Philippines in 1976.

Don, Carla, Brad and Kristi lived in a gated compound in Los Baños. The compound had about twenty homes and people of all nationalities lived in it.  Carla continued to do hair and play bridge.

After returning to the US, Carla goes to work in the President’s Office of the MU doing secretarial work. She then gets hired as the secretary to the corporate treasurer of Silvey Insurance. She worked there until 1990.

In 1990, Don had the opportunity to work with the University of Arizona on a long term project in Egypt. Don and Carla spent the next four years in Cairo where Don worked with the Egyptian Undersecretary of Agriculture and Carla worked at the CSA (Community Services Assn). She played a lot of bridge and loved visiting the Khan El Khalili souk, an outdoor shopping bazaar.  She didn’t know the language well, but the drivers spoke English.  They had a huge home and did lots of entertaining.  She did learn that you don’t buy meat from a guy who didn’t have flies; that meant he had sprayed it with insecticide.

Don retired in 1994 and they returned to the states. After spending a month driving around the southern US, the couple settled in Sun City West, AZ Carla continued to play bridge, was still active in her sororiety and was involved in the newcomer’s organization. .  In 2002, they moved to Bella Vista, AR, and designed and built a home on an acre lake lot.  However, Don’s health declined and the lot became too much for them to take care of and so in 2010, they moved to Liberty to be closer to Kristi and her kids.

Don and Carla moved to Westbrook in October of 2017.  It was getting harder for Carla to take care of the house and Don’s health was still declining. They wanted a place where they were mostly taken care of and didn’t have to do upkeep. She enjoys playing bridge with some other residents. She says the staff is outstanding, friendly and always willing to respond to any needs.

As for her family, Jetta passed away in 2012, leaving behind a daughter. Brad is married to Cindy.  Kristi is married to Shane and has three kids. Don and Carla also have six great gran