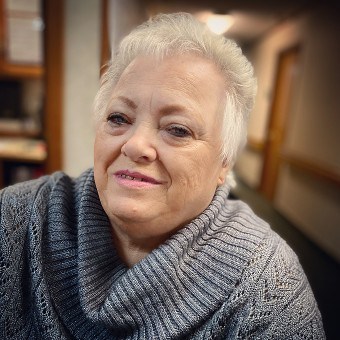 Donna was born in Mitchell, South Dakota, to Don and Geraldine Underwood. She was the oldest of five children, three boys and two girls. She lived in Hot Springs, SD, until she finished fourth grade. The family relocated to Portland, Oregon. Donna remembers it was a long, hectic drive across country. Her dad had built a trailer that they slept in on mattresses. They were 180 miles from Portland when they broke down. Donna’s uncles came to help them out and they finally arrived about 8-10 days after they left South Dakota.
While still in South Dakota, Donna loved to play outside. There was a concrete wall on their property and Donna and her brothers loved to jump off it and go play in the grassy fields. She also loved swimming in the hot springs. Donna would visit and help out some of the local elderly. She has always loved working with the elderly. Donna’s dad had polio and lost the use of his left arm when she was seven years old. Therefore, he couldn’t work much and so her mother worked. They were very active in the Lutheran Church.
Donna wasn’t real fond of school. It was okay and she got to see her friends. In Portland, she attended Franklin High School. She enjoyed playing lots of sports including basketball, volleyball, baseball and especially tetherball. She also loved dancing of any kind. She graduated high school in 1966.
Donna’s family belonged to a Western Club that hosted dances for families. They would have six or seven bands that played an hour each. While working at the check in table with her mom, she met a gentleman named Howard Hartford. He said something to her and she smarted off to him. He then informed her he was going to dance her feet off. She laughed but he did sweep her off her feet. They started dating in April, got engaged two weeks later and married in July 1966. He was ten years older than her and divorced. He also had four kids who went on their honeymoon with them though they lived with their mother.
The couple settled down in Seattle, WA. Howard worked as a truck driver for Montgomery Wards and Donna went to work for Boeing. They relocated to Roseberg, OR. It took them all day to go 200 miles due to three foot of snow. She was pulling a trailer and Howard was driving a U-Haul.
Donna received a grant to go to beauty school. The same day, she found out that she was pregnant. They were relocating to Portland. While getting ready to move, Donna hurt herself and was unable to help move. Howard’s ex-sister and brother in law as well as their landlord helped them get moved. She started school but had to quit to have their first child, Kenny in 1970.
She returned to beauty school when Kenny was six months old. She graduated in 1972. Her mother was her student model. She started working at a salon. She got pregnant in August with their second child. Due to a hormone imbalance, she had to have shots to keep the pregnancy viable. Their daughter, Jennifer, was born prematurely in May. She weighed 4lbs 11oz. After Jennifer’s birth, Donna had her tubes tied.
When Jennifer was two years old, Donna went back to work. The family moved to Washogal , WA in 1976. They bought five acres and her sister’s mobile home to live in. Unable to get the permits, they ended up putting the trailer on her mom’s property. They lived there for four years before moving to Vancouver, WA. Donna opened her own in home beauty shop.
Donna started working for her sister as a merchandiser for True Value in 1994. Howard worked for Montgomery Wards until they closed in 1985. He then went to work for Franz Bakery where he was hurt on the job. He retired in 1996. Donna traveled all over the United States. Howard would go with her. They would leave on Monday and get home on Friday and then leave again on Monday. They were in Chicago on 9-11. They had to rent a car because all flights were grounded and their car was at the Portland airport.
In 2001, they moved to Kearney, MO, after having relocated her mom and step dad to Liberty, MO. Shortly thereafter, they bought a house in Holt. Donna retired August 31, 2005.
Howard and Donna have six kids between them; Rosie (Dennis), David (Debbie), Diana, Tracy (Bruce), Kenny (Kathy) and Jennifer (Roger). They have 20 grandchildren, 23 great grandkids, 9 great greats and 2 great great greats.
After retiring, they traveled all over visiting their family.
In December 2020, the couple moved to Westbrook. Their bodies had broke down and they weren’t able to do stairs. They moved from an apartment in Liberty.
Donna says she loves the people, both staff and residents. She really likes being able to help some of the other residents. It gives her purpose. She encourages them, gives the backrubs and just talks with them. She also likes how everyone keeps tabs on each other and the fact that everything is kept really clean.
Besides visiting and taking care of the elderly, Donna has spent most of her life creating things. Most recently, she has taken up coloring, markers or colored pencils. She has a friendly competition going on with her neighbor, Joyce.
Donna says that helping and working with other people is important. It makes both her and them happy as well as makes their lives better.
Howard and Donna have been married 55 years and were avid square dancers in their day. They both reminisce quite fondly of their life together.