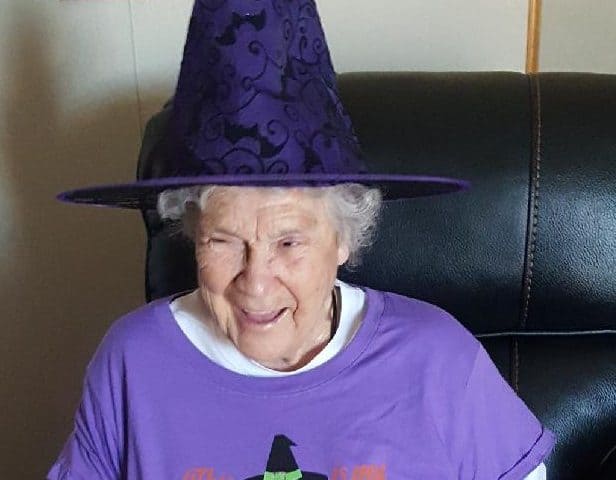 Ella was born in Clay County, MO, in what is now Liberty.  She was the only child of Frank and Frances Liggett.  Her father was a farmer. Her mother was sickly and Ella helped to take care of her from age 7 until her mother’s death when Ella was 14.  Ella’s father continued raising her on his own.  He cooked and farmed and Ella took care of the house and went to school.  She attended Providence School through eighth grade. Her freshman year, she attended Liberty High School.  Her father purchased a farm on Frances Rd when Ella was a sophomre and she graduated from Kearney .

When Ella was a young girl, their neighbors adopted a boy, Harold, who was 8 or 10.  He was four years older than her, but they became friends.  When Ella was 14, Harold went into the service.  She wrote him letters for the next three years.  He told his buddies that he was going to marry the girl he was writing.  When he came home from the service, Harold and Ella started dating.  He was 21 and she was 17. They dated about a year and married in March of 1949.  She graduated high school in May and they welcomed their first child, Bobby, in October.

Harold and Ella lived with Ella’s father.  Harold helped some around the farm but he was working for the Clay County Highway Dept when they married. He changed jobs to the Lake City Munitions Plant before getting hired on at Ford in 1953.

In 1951, their daughter, Marilyn was born. Rick joined the family in 1952. Ella said that was when the real work began.  She was raising three children who were three and under.  It was hectic and hard work but rewarding.  Cindy rounded out the family in 1954.  Ella also had a big garden, chickens (she raised about 150 a year) and guineas to look after as well.

In 1956, their farmhouse burned down.  They lived in the Frances Schoolhouse for a while.  Then someone gave them a two story house.  They transported it by tractors to the farm and placed it by the garden.  They lived in this house which was up on jacks until the new house was built.  Ella said that every  time it stormed they were afraid the house would fall.

Ella’s father, Frank, came to her and informed her that he was going to get married again.  She was surprised because he had said he’d never remarry unless he found an old maid.  Mary Ruth was about 50 when she married Frank, who was also in his 50s. Ella’s children were in Frank and Mary Ruth’s wedding.  Frank had already sold the farm to Harold and Ella so he moved to Mary Ruth’s house in Nashua.  To everyone’s amazement, Mary Ruth got pregnant, miscarried and then gave birth to Frank Thomas.

Once the children were in school, Ella went to work at the feed store candling eggs. In the mid 60s, she became a mail carrier in Liberty.  She retired from the Postal Service with twenty years of service.  Harold had retired in 1983 from Ford.  They continued to work the farm raising tobacco, corn and hay.  They also had the big garden, cows, pigs, goats, chickens and guineas.

Harold and Ella enjoyed square dancing and Ella liked other forms of dance such as jitterbugging and polka dancing. They would also play cards with friends.  But Ella’s real passion was her flower gardens.  She loved working in the dirt and had several different types that she raised including castor beans, zinnias, petunias, holly hocks, marigold and canna lilies.

Harold got sick in 1993.  He had renal failure and Ella took him weekly for dialysis. He passed away in 1997.  Ella continued living on the farm however they had already quit raising animals and quit farming everything except hay.

Ella met Roger Vanderpool in 1999.  They became good friends and traveling companions. They loved each other but neither one wanted to marry again.  They traveled all over the country though they really loved Colorado. They made a trip with Jim & Cindy to Florida where Ella saw the ocean for the first time and visited NASA.  Sadly, Roger died suddenly of a massive heart attack in 2010.  They had just eaten breakfast out and he went to the restroom.  Next thing Ella knew, they were telling her that Roger was gone.  She was all alone and it was very traumatic for her.

Ella continued living on the farm.  She was in a bad car wreck and Marilyn told her they would go on vacation when she healed.  Over the next four years, they traveled  together to places such as Niagra Falls, the Grand Canyon, Yellowstone and Devil’s Tower.

Ella had another wreck that left with a broken hip and a shattered leg.  She healed but her kids took the car away from her.  Without her car, she couldn’t get out as much.  Marilyn lived with her but was busy with her own endeavors. So in August 2018, Ella moved to Westbrook.

Bobby, Cindy & Marilyn felt Ella needed to be around people and have things to do.  Westbrook offered that.  Ella loves the personalities she encounters.  She likes her space at Westbrook though she misses the farm.  She also enjoys all the different activities offered to her.

Ella has eight grandchildren, twenty-six grandchildren and a great great grandson.  She says that family is her life and it is important.  Families need to take care of each other.  It is also important to Ella that they put God first in their lives like she has done.