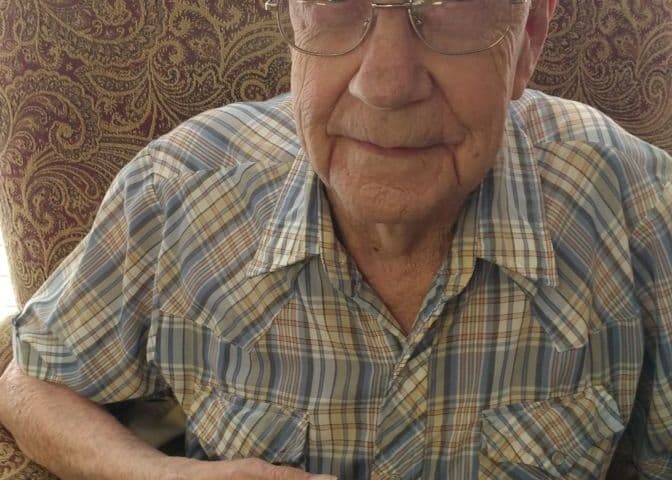 Paul Clevenger was the fourth child born to Everett and Nellie Clevenger.  His oldest brother was stillborn but he had two sisters – seven and nine years older than him.  He was born in Rayville, but his parents bought a 40-acre farm in Orrick and moved the family there when Paul was three years old.  Paul grew up helping out around the farm.  He also had a love for running.  The high school didn’t have a track so he ran on dirt roads mostly.  Though Paul enjoyed school, he dropped out after his sophomore year to help his dad on the farm full time.  He had a team of mules he used and his dad had a team of horses.

When Paul was seventeen, he was drafted into the Army.  It was $45 a month but if he volunteered to be a paratrooper, he would receive an extra $50 a month.  So Paul went to paratrooper school in Ft. Benning, GA, and there he received the only diploma he’d ever earn.

Paul was in the 517th stationed in Joigny, France.  Their mission was to land behind enemy lines and rescue soldiers who were trapped.  Paul carried out missions in France, Italy, Germany and Belguim at the Battle of the Bulge.  Paul was also at Normandy Beach during the D-Day invasion having come across the English Channel in a U-Boat.  The 517th was headed to Japan but the war ended before they arrived and the boat (Oneida Victor) he was on turned around and headed stateside.  Paul remained in the Army, as a cook, until his discharge in 1946.

Paul returned to Orrick and continued helping his dad on the farm.  Paul attended Union Baptist Church and at the age of 22, he became a Christian.  He started singing in church and at revivals.  He became highly sought after and was soon leading the music at revivals in Ray, Clay, Clinton and Caldwell counties. He had 65 suits, a LOT of long sleeved white dress shirts and numerous pairs of cufflinks.  He would sing with his dad, Uncle John, and Aunt Edna while his mother accompanied them on the piano. Paul was ordained a deacon at Union Baptist and was ordained a minister in Camden. Paul also borrowed the money and bought a hay bailer. He was very busy between baling for others, helping out on the farm and doing revival meetings.

In 1970, Paul met Betty Hyatt, a divorced mother of two boys.  She collaborated with him writing the lyrics to “I Praise Him Everyday”.  Paul wrote the music and said it was very time consuming as he didn’t really play the piano, but used the hunt and peck method to find the right notes.  Paul copyrighted the song in 1971.  It became very popular and was even recorded by The Gospelaires.

Paul and Betty started dating and married a few years later.  The revivals had faded away and Paul started drifting away from church as well.  However, he continued to read and study the Bible.  He bought a 40-acre farm that adjoined his fathers and took to farming full time. Over the next several years, Paul continued to buy farmland and amassed 365 acres. Bobby, Betty’s youngest son, lived with them on the farm. Her older son, Leroy, was in the Air Force. Paul and Betty traveled quite a bit since Paul had employees who could run the farm in his absence.  They traveled throughout the US and into Mexico, but their favorite trip was going to Branson and fishing on Table Rock Lake, which they did often.  Paul recalls how Betty’s cousin in St. Joe had a plane and they would often fly to Texas for dinner and then fly back home the same night.

In the early 90’s, they built Clevenger’s Kennel and Cattery.  They raised German Shepherds, Shih Tzus, Himalayan and Persian Cats.  Paul said there was a lot of paperwork involved which Betty handled because all the animals were registered. They sold the kennel in 1998.

Paul and Betty divorced in 1994.  Paul sold the farm and Betty moved into a fixer upper in Excelsior Springs that she received from Paul in the divorce.  Paul moved into the house temporarily to help her get it livable as it didn’t even have running water.  Eighteen years later, she finally kicked him out.  He said they were much better friends after the divorce.

Betty started working at Westbrook in 1995 as a CMT.  A couple of years later, Steve mentioned he needed help in housekeeping and asked if she knew anyone.  She said Paul could do that.  And so in 1997, Paul started working at Westbrook in housekeeping.  Paul said he didn’t meet Steve until after he’d been working here for three weeks.  Paul started helping out in the kitchen in 1999.  Paul eventually only cooked in the kitchen before retiring in 2014.

When Paul moved out of Betty’s house, he moved into Westbrook (2012). So Paul’s commute from 2012-2014 was rather short – just from the 700 Hall to the kitchen.  Paul’s apartment is quite the showplace with all of his American Indian artifacts and numerous paraphernalia and awards from his days in the service.

Paul loves the people at Westbrook, especially Steve and Amy.  They hold a special place in his heart even though he is fond of all the staff and residents.  Steve and Amy even accompanied him on the Honor Flight to Washington DC in 2009.  Paul’s love for music is still present and he enjoys coming out for all the music programs. Paul’s passion is going to the boats and he likes that Westbrook is close to the boats. Paul says that he has never played BINGO here at Westbrook but he thinks that he probably ought to try it sometime.