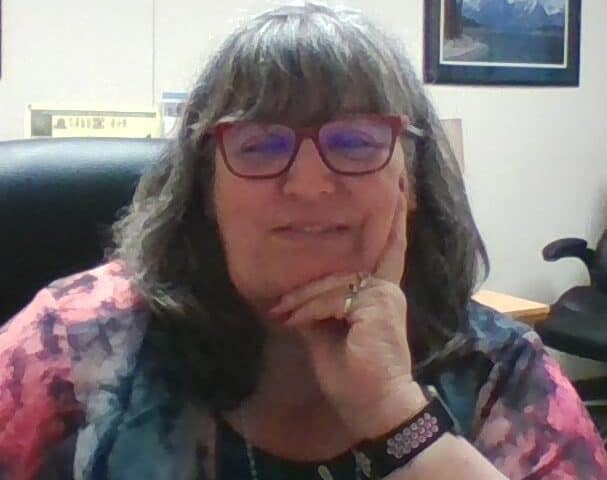 Featured Staff – Janelle Simoneau
I have been writing these biographies in the Chatterbox since August of 2008. Every month, I get to learn about someone new. In all of these years, I have never written about myself. So after 22 years of working here, here is my story.
I was born in Kansas City North to Andy and Judy Andersen. I was their third child and the only girl. When I was 13 months old, we moved to Gladstone. And three years later, my younger brother was born. I was still the only daughter, the only granddaughter and the only niece on both sides of the family. And yes, I was most definitely spoiled.
I attended Linden East and Linden West elementary schools. My first grade teacher told my mother that she had never had a student that talked as much as I did. But I was an inquisitive child. I wanted to know everything. How else was I supposed to learn if I didn’t talk and ask questions.
I went to New Mark Middle School and then Oak Park High School. I was very active in school. I was on the debate team and the extemporaneous speaking team. I was a member of the German Club having taken German all four years. I was a teacher’s assistant my junior and senior year for my English teacher. And I was very involved in Youth For Christ, attending rallies, club meeting s and their camps.
After graduating from Oak Park, I went to Maple Woods Community College. I basically flunked out due to the inability and desire to study. I never studied in high school but that wasn’t how college worked.
So I went to work for La Petite teaching four year olds. I loved this job but the pay wasn’t great. I had moved to my own apartment in NKC and needed a better paying job. I went to work for ABC Farmline taking customer order for farm equipment. I did this for several years until they downsized and I was a casualty.
I then went to work for Pizza Hut as a delivery driver. I also worked seasonally for the IRS. There were some days that I only got two hours of sleep. Many evenings my dog and I would split a pizza for dinner.
In 1989, I was introduced to a new gentleman at church. His name was Jerome Simoneau. He was a single father of two kids. We hit it off and spent quite a bit of time together with the kids and with other people. In August of 1993, he finally gave up and proposed. We were married in April 1994.
I moved to Kearney after we were married. I went from single with a dog to married with two kids and two dogs. I was quite a shock to my system. That first year was rough. So many adjustments.
My father got me involved with AARP in 1995. I started working as a volunteer preparing taxes. I love doing taxes and being able to help other people out. I just completed my 27th years with AARP Tax Aide.
I ran an in home child care for a few years. Then I went to work for Aunt Ann’s Day Care. I taught four year olds. I would bring my class to Westbrook to entertain the residents. It was here that I met Winnie Kimsey, the activity director. She was having some health problems and so I ended up leaving Aunt Ann’s and started working at Westbrook in February 1999. I loved it right off the bat and still do. I became the Activity Director upon the passing of Winnie in 2008.
In February 2001, our daughter, Chloe, was born. In May, I officially adopted Jon and Desire’e. It was definitely a God thing. There’s more of a story there than I can fit on this page.
One of my greatest and hardest experiences was taking care of my mother as she battled cancer. We lost Dad to cancer in 2006. We were all there to help mom. In 2010, Mom was diagnosed with multiple myeloma. The next three years were such a blessing and yet, so very hard. She passed away seven years and one day after Dad. I feel so privileged to have been able to take care of her. She was an amazing woman and I have no regrets about being there for her like she had been there for me all my life.
All my children are now grown. Jon and Pam have four daughters, the oldest will be sixteen in December. They live in Golden, CO. Mark and Desire’e live in Dacono, CO, but they are looking to move back to Missouri. They have no children. Chloe still lives at home and is attending college.
Over the years, we have been involved in many things. Chloe was in ACT One, a musical theater group, and we were in charge of the tech team. My husband smokes meat and cooks for City Union Mission and our church. We are still actively involved in Antioch Bible Baptist Church.
Every October, we go to Osage Beach for a week. We have a condo down there that is right on the lake. It is our favorite thing next to camping, which we love to do in our trailer.
This is just a brief snapshot of my life. Maybe it will explain a little of why I am the way I am. LOL I have lived a very full life – family, work, church, friends and so much more. I am truly blessed.