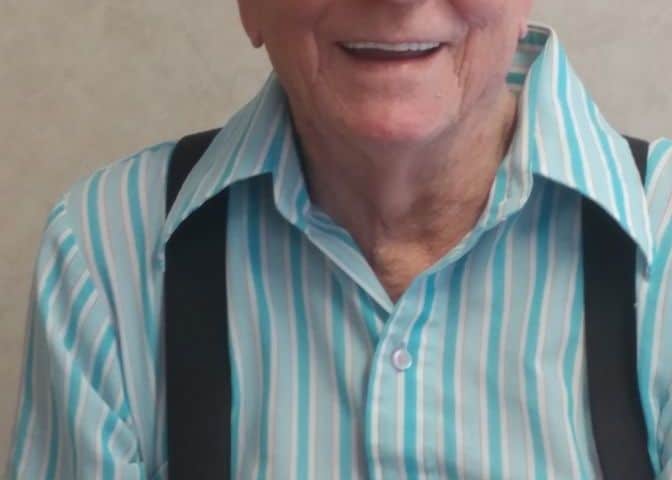 Foy Babcock was born in Heidenheimer, TX, to GW and Janie Mae Babcock. He was raised on a cotton farm with two brothers.  Besides raising cotton, the family had cows, horses and mules that were used to sustain the family and the farm.  Foy grew up climbing trees, fishing and helping to pick & hoe cotton. Foy attended a country school. He missed first grade due to a leg injury, but kept up with the help of friends and family. The Babcocks owned a small country grocery store, which his mother managed. Unfortunately, the store burned down when Foy was nine and they did not have the resources to rebuild it. Foy grew up attending the Church of Christ.  If the doors were opened, his family was there.

When he was 17, he quit school and joined the Army Air Corp. It was the end of WWII and he remained state side in the Military Air Transport.  He served 13 months before being discharged.  While in the service, he met and married.  They had a son, Randy.  The couple divorced in October of 1949.  Randy stayed with his mother.

Foy work for the Santa Fe railroad for a while but ended up moving to Dallas looking for work. He lived with his brother and sister-in-law.   On December 5th, he was introduced to Dorthy Pittman.  She lived next door and had come over to see his brother’s television.  She’d never seen one and only got to see a test pattern since the station wasn’t on the air until evening.  Foy had just gotten out of the shower, his hair was mussed and he didn’t have a shirt on.  Realizing they had company, he went and combed his hair, put on a shirt and returned to ask Dorthy out for dinner.  She said yes. They went to dinner that night and every night for the next two and a half months.  They married on February 20, 1950.

Foy went to work in the oil fields and from then on they moved around a lot.  The couple had three boys – Alan in Dec. 1951, Larry in May 1953 and Jimmy in April 1958. In 1960, Foy went to work for Dickey’s as a route/sales man in Odessa, TX.  They bought a house and settled down.  Foy was promoted to supervisor of the route/salesmen.

After thirteen years, the family moved to Bogata in northeast Texas and Foy sold insurance for American National. In 1977, they moved to Amarillo.  Their son, Larry, was married with children and lived in McCook, NE. Amarillo was as close to Larry’s family as they could be without leaving Texas. Foy went back to being a supervisor for Dickey’s.

Four years later, they were offered the job as “house parents” at a children’s home in Nebraska. They left Texas and moved to Culbertson, NE. After two years, the couple moved to Temple, TX, to take care of Foy’s aging mother.  A year later, Foy’s brother decided to take care of their mother and the couple moved back to the children’s home in NE.  But once again they returned to Temple, TX, and took over the care of his mother.  They shared a duplex that his mother owned until her death in 1994.  During this time, Foy worked for the Department of Public Safety as a maintenance man.

Foy retired in September 1994. They bought a house on six and a half acres just outside a Bogata, TX. Foy spent his time mowing, cutting down trees, fishing and maintaining a large garden (an entire acre). In 1997, they sold the house and bought a travel trailer.  For the next year, they traveled all over.  They thought they would really like traveling but ended up deciding it wasn’t for them.  So they sold the trailer and bought a house in Bogata.

The couple relocated to Kansas City North in 2001 to be nearer to Larry. The couple bought a house near Winnetonka High School. In 2002-2003 Foy was hospitalized for six months with a  pancreas problem. He had a cyst the size of a grapefruit removed. He was on a feeding tube for so long that there were concerns about whether his stomach would be able to function again. It did and Foy made a complete recovery.

Larry relocated to Kearney and wanted his parents closer to him.  So they started looking for a place.  Westbrook was the first on the list.  They looked at the facility and saw a two bedroom apartment.  Inside of five minutes, they decided to take the apartment.  They had lived in their house in KC for sixteen years which is the longest they have lived in any one place.

Foy loves the choice location of his apartment and small town living.  He says the food tastes delicious and is plentiful and best of all, he doesn’t have to fix it.