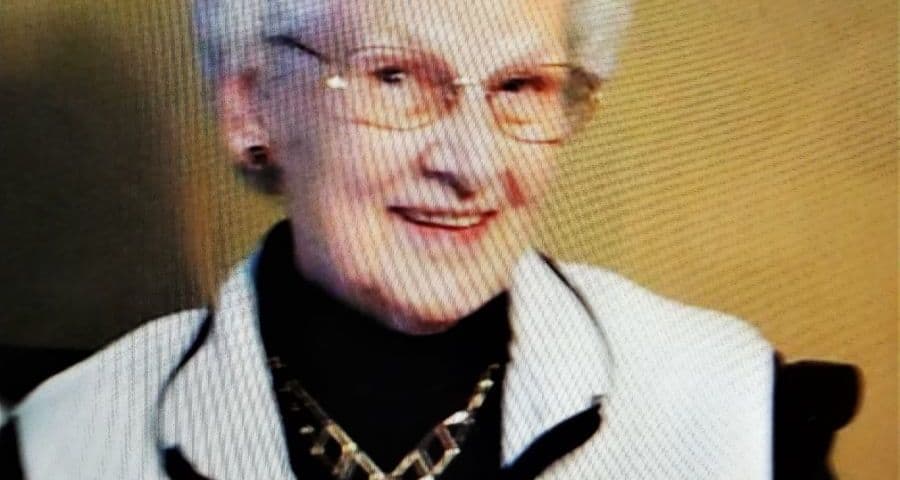 Frances E Braden (aka Frankie) was the eighth of eleven children born to Everett and Harriet Lowrey.  There were seven girls and four boys.  When she was born, they lived in a two room shack near Tina, MO.  She vaguely remembers sleeping on a pallet in an attic area.  When Frankie was three, her family moved to California to look for work; there were nine kids and her parents in a Model T.  After a month or so with no luck, they moved back to Missouri. Her father rented a 160 acre farm near Dawn, where he sharecropped corn, oats and wheat. The farm had a big eight room house but no electricity and no running water. The kids helped with hoeing the garden and taking care of the chickens.  Frankie remembers banging pans to scare the hawks away from the baby chicks.  The kids attended school in Dawn which was about 4.5 miles from home. They didn’t have snow days so the radiator was full of wet gloves in the winter. Frankie’s favorite subject was recess and she enjoyed socializing with her friends and family. In 1941, Frankie graduated as Valedictorian of her class of 12 students.

After graduation, she attended the Chillicothe Business College before going to work at Northwestern Insurance Company in Kansas City as a receptionist.  There was not enough work so Frankie went to work for the Kansas City Quartermaster.  She was in charge of supplying athletic equipment to the troops stateside and abroad. This job lasted until after the war was over when returning servicemen took over the work.

Frankie had ran into John Braden when he was home on leave in 1941.  She knew the family but was three years younger than John.  He asked her to write him and so she did for the next four years.  When John came home in November 1945, she met him at the station.  They married in March 2, 1946.

The couple moved to Kansas City. John went to work at Pennsylvania Rubber and Frankie stayed home. They moved to Utica where he and his uncle had a service station at Utica & Dawn junction.  Out of respect for Grandma Braden, they didn’t sell beer. So Murf took over and John escorted bodies of servicemen to their homes.  In January 1947, their daughter, Pat, was born and Terry joined the family in November 1948. John went to work at a bank in Dawn in 1949.  He was called back up to the Army in November 1950 and the family moved to Ft. Leonardwood.  In January 1951, Mike was born and John was discharged from the service.

The family moved to Ludlow and John worked for the bank.  David joined the family in June 1953 and Greg in November 1955.  John got another bank job in Chillicothe and the family relocated once again in 1956.  Kathy was born in 1957. In 1959, the family moved to North Kansas City and John became a bank examiner.  The family eventually settled in Lee’s Summit and John became a loan officer at Lee’s Summit Bank. Becky was born in July 1963 followed by Jeff in December 1967.

Frankie stayed busy raising their eight children.  She had joined the Catholic Church when she married John.  She was very active there including helping with fundraising and cleaning the building.  She was even the president of the PTA for their Catholic School two years. They also loved spending time with family – they would get together and play cards or just visit.

They moved to Greenwood, MO, in 1970 and built an earth home.  She loved how easy that house was to clean and how cool it would stay. Eventually they bought a 40×40 shed behind the house and sold the home, choosing to build a house in half of the shed. John retired in 1981.

Mike, David, Greg and Kathy all had moved to Washington.  So John and Frankie went every summer to visit them.  John’s family loved fishing so they made trips to Minnesota as well as spending time fishing on Lake Pomme De Terre. The couple wintered in Texas three years as well.  John passed away in 1991 from lung cancer.

Frankie stayed in Greenwood – first with Jeff living there and then Pat moved in when Jeff left.  Pat and Frankie ended up buying house.  In 1992, they moved to North Kansas City to be near Pat’s daughter, Amy, who had just had twins.

In May of 1997, Frankie moved to an apartment in Chillicothe to be near six of her siblings.  Some were in poor health and so she helped take care of them.  She was still active in her church.  She played lots of cards – her favorite being Hand and Foot.  She also joined a widow’s group that had lots of activities.

Frankie moved to Kearney, MO, in 2011, to be closer to her sister and kids.  Her kids found her an apartment in a senior’s apartment complex.  However, health concerns started arising and in September 2017, Frankie moved to Westbrook.  She likes the place and her younger brother, Russ, lives here.  Frankie talked about how Russ and she would drive the family car because her parents didn’t drive.  One of them would steer and work the pedals and the other would shift.

Frankie likes how clean her apartment is and how it’s well arranged.  She loves the food and getting to share her meals with her brother.  She also really likes the people who she says are so friendly.  Frankie enjoys doing jigsaw puzzles in her apartment.

Besides her eight children, Frankie has 5 sons/daughters-in-law, sixteen grandchildren, nine grandchildren-in-laws and twelve great grandchildren with one more on the way. Of the eleven Lowrey siblings, Frankie, Russ & Peggy are left.