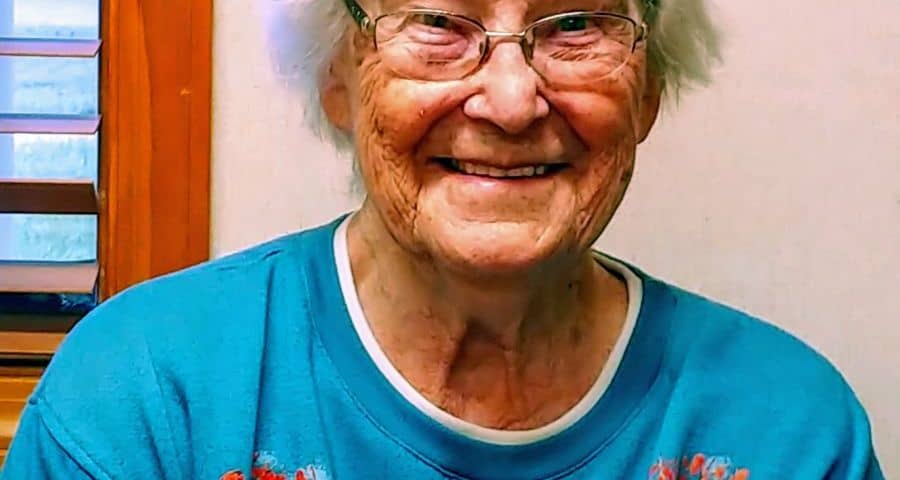 Jennie Dale was born in Blue Springs, MO, when it was just a town of about 500 people. She was the second youngest of seven children. Her parents, Charles and Mary Leek, were poor but they loved their children and taught them right from wrong and to use their manners. Jennie had four older brothers that taught her to play baseball and basketball as well as card games.  The kids even made their own stilts and would walk around on them.  Jennie likes school and was very competitive, always wanting to excel above others.

Jennie started delivering the Independence Examiner in seventh or eighth grade.  She also worked in the local drugstore on Saturdays for $.10 a day.  As a freshman, she would stay with a lady while her husband traveled for his job for $3 a week.  Her senior year, she worked in the Tempter Sandwich Shop at 13th and Main. She graduated from Blue Springs High School in 1943.

After graduation, she went to work at National Parking Garage at 11th and McGee as a cashier.  She and her sister each rented a room at a doctor’s home before getting an apartment together.  The manager of the parking garage was a man named Ralph Dale.  They became good friends and eventually started dating.  He was fourteen years older than her and had been divorced. They dated five years before marrying in 1948.

The couple lived in Pleasant Valley before moving to a 43 acre farm in Kearney in 1950.  They did not farm but did have six horses, three milk cows (which she was excited to learn how to milk) and over time had cattle as well as Chester White hogs.  Ralph still managed the parking garage. They enjoyed their life and were very active in the Methodist church.  Jennie was a Sunday school teacher, a 4-H leader and a MYF leader. Over the years, she worked VBS, was the President of the women’s group and a member of both Rebekah Lodge and Bethel Extension Club.

They had been trying to have children but the doctors told them she wasn’t able to have kids. So in 1952, they adopted an eight year old boy named Roger. They were in the process of adopting a baby when Jennie got pregnant.  She was 34, Ralph was 48 and Roger was 14. In 1959, they welcomed Elizabeth into their family.  Then in 1960, they had Jennifer. In 1961, Ralph was born and Danny was born in 1963.  Their final addition was Emily in 1964.  So they went to having one child to six in matter of five years.  She was 39 and Ralph was 53 and they had five children under six.  What a handful!  She’s not sure how they did it but they did and felt very happy and very blessed.

Jennie had gone to work for accountant JP Craig doing copy work in 1952.  He really wanted her to do income taxes but she didn’t feel qualified.  Over the next few years, he changed her mind and she was doing the taxes while many of the clients thought they were being done by JP.  When he decided to retire, Jennie and Francis Thompson opened their own firm. That was in 1965 and they only had office hours a few months a year since all they did was income tax.

Ralph had a mild stroke in 1976.  He retired from the parking garage after 47 years on the job. The stroke changed his personality but he was still able to do things for himself including driving. In 1981, Jennie sold her business and retired.  She and Ralph had planned to travel but the stroke kept them from doing that.  Ralph had a massive stroke in 1990 and Jennie took care of him at home. In 1991, he got pneumonia.  He ended up passing away at Liberty Hospital.

In the early 90’s, Jennie went to work at H&R Block. Her daughter worked there and was complaining there wasn’t enough help and it was hard to get everything done and answer phones. So Jennie became their receptionist. She retired from there in 2001 at the age of 76.

Jennie moved in with her son, Roger until he passed away in March of 2017. She moved to Westbrook in April.  She loves the people here, both staff and residents.  She says that they are all so nice.  She enjoys the activities, especially Gerry Barr and Martha Armstrong, who are like children to her.  She loves how spacious her apartment is.  She is still able to host bridge club. She also does jigsaw and word puzzles in her room. She loved to read and she really, really likes to talk.  She says that after 65 years in Kearney, she can tell you a story about just about anyone.