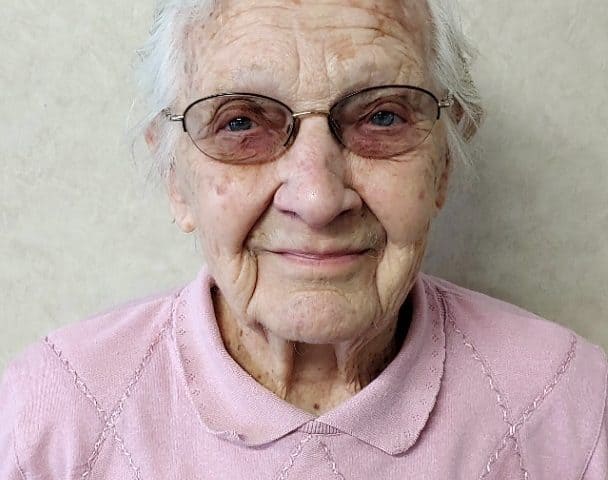 Donna Jane Watkins (Janie) was born in Fairfield, IA, though her family lived in Libertyville.  She was the only child of Harold and Florence Watkins. She grew up on a farm a couple miles outside of town. She helped around the farm doing whatever chores needed doing.  She really liked school and enjoyed walking to town to attend class. She attended Libertyville Methodist Church faithfully.  She graduated from Libertyville High School.

After high school, she went to work doing clerical work for a company in Ottumwa, IA. In 1943, Janie and her lifelong friend, Jean Davis, decided they wanted a change of scenery.  They wanted to do something different and so they moved to Washington D.C. Janie got a job at the Pentagon, which was a brand new building, and Jean worked in town.  The girls thrived and loved it.  Their mothers came to visit them and were surprised how well the girls were doing.  Jean stayed in D.C. for five years but Janie moved back to Libertyville in 1945. She got a job doing clerical work at Dexter Washing Machine Company.

Janie grew up with Jack Allison. Somewhere along the way, they started dating and married even though their parents weren’t real happy.  They married in November 1945 and moved to Fairfield, IA. Janie continued to work at Dexter’s and Jack got a job as a truck driver for John Morrell Meat Packing.  Jack and Janie loved to go dancing and roller skating.  Janie continued going to church even though Jack didn’t.

In 1947, the couple welcomed their son, Jon Wayne, into their family. Two years later, Sue came along.  The couple relocated to Agency, IA, in 1950. In 1952, Gary was born.  The family moved back to Libertyville, IA, in 1953.  Libertyville was a town of 92 people.  Members of the Allison family owned the restaurant and grocery store, taught at the school, managed the school’s kitchen and ran the Volunteer Fire Department. Family was everywhere.

The couple continued dancing and skating on Saturday nights.  Janie and her friends would get together and the kids would play while the moms visited. And Janie took the kids to church every Sunday.

Jack’s family was very involved with horses, raising them, showing them and racing them.  Jack and Janie got involved with showing horses and ponies.

Jack was working for Yellow Freight and got transferred to Liberty, MO. Jack and Janie moved to Liberty in 1960 and ultimately bought acreage behind William Jewell College. They brought horses with them and continued showing horses.  They traveled a lot attending horse shows and county fairs.  Every year from May to October they would travel the circuit, attending fairs in Missouri, Iowa, Illinois, Nebraska, Kansas and Oklahoma.

In 1961, Janie got a job at William Jewell College in the Administration Building.  She worked during the week and traveled with the horses on the weekends and over vacations.  Both Janie and Jack retired in 1991. They continued traveling with the horses and would go to the Lake of the Ozarks for relaxation.

Jack had a heart condition which ultimately caused his death in 1995.  Janie stayed on the acreage and continued showing horses with Sue, who also trained horses for a living.

In 2001, Janie sold the farm and moved to the south end of Kearney.  She bought a house and continued to be involved in church.  She still traveled with Sue showing horses.

Because of declining health, her family felt it would be better for her not to live alone. Gary had heard good things about Westbrook and so they toured it.  Janie moved to Westbrook at the end of April 2017. She says she loves the residents and staff.  They have treated her very well.  She really enjoys the activities.  And she likes not having to think about cooking and cleaning.  It’s all done for her.  She also enjoys watching Royals baseball.