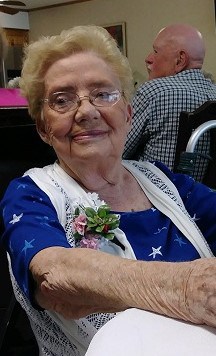 Marjorie “Marge” Anderson was born on a farm outside of Greenfield, MO.  She was the fifth of six children born to Edgar and Bessie Jaquess. The family relocated to the Maywood area of Independence, MO when Marge was about two.  Growing up she loved to play with dolls, ride bikes and swimming.  She recalls going to the Maywood Pool and swimming all day during the summer or walking to the local drug store for ice cream.  She liked school with art, music and recess being her favorite subjects.

Marge started babysitting at the age of 14.  She babysat for the owners of the Winsteads off 70th street.  At 15, she started working at the Trolley Drive Inn as a carhop.  One day, a young man named Dave Anderson came into the diner for lunch.  He had recently moved to Independence from Iowa.  He was living with his sister and working for Lake City Munitions Plant.  He soon became a regular and eventually started taking Marge home after work.  They dated for about a year. She married the love of her life on February 24,1950.  She had to wait until she was 17 before her mom would let her get married.

The couple settled down in Independence and Marge went to work at the dime store. In 1951, they welcomed their first child, Pam, into the family.  Two years later, Debbie came along.

In 1955, Dave got a job at Lockheed and the family relocated to Atlanta, GA. After two years and feeling homesick, the family moved back to Independence and Dave went to work at the Bendix plant. Marge stayed home with the girls and in 1958, the couple welcomed their son, Dave, into the family.

Dave and Marge’s neighbor was learning to become a square dance caller and got them involved with square dancing.  They made lots of friends, some of which Marge is in contact with still.  They had the opportunity to do square dancing demonstrations in various local malls. Church was also important to them and they attended Maywood Baptist. Marge wrote articles about brides and their weddings for the Independence Examiner. Marge was busy with her children, being a room mother and being a Campfire Girl leader.

The family moved to Lee’s Summit in 1965.  They started attending White Ridge Baptist church and later attended First Baptist of Lee’s Summit. Over the years were very involved in church.  Dave taught Sunday School and was a deacon while Marge taught a children’s Sunday School.

Marge started beauty school after the move to Lee’s Summit.  She went to work for a beauty shop until they had to close and then she started working for a friend’s shop.  Her career as a beautician ended just two years ago; the last several years she had only worked part time.

Dave and Marge loved to travel and the family took many vacations with friends.  They would go camping in the Ozarks and visited places like California, Florida and Texas.  As the kids grew up and got married, they would still do things together. Dave would go hunting with Pam’s husband and boys.  That was always the day that Pam and Marge would go power-shopping. Family is very important to Marge. She says family needs to stick together.  Her fondest wish is that her entire family would come to know and serve the Lord.

Dave retired in 1995.  The couple continued traveling with friends. They traveled by car and really liked going south where it was warm. They made yearly fishing trips with their church friends to Ten Mile Lake, Minnesota. They’d come home, have a huge fish fry and tell some “big” fish stories.  They took a bus tour of the New England region and a trip to Israel. They were passionate about gospel music sings and would travel all over attending them. They also went on several mission trips with their church including going to Joplin to help after the devastating tornado in 2011.

The couple went on couple of cruises. On one such cruise was in 2017 when they celebrated their  67th wedding anniversary.  They were the oldest married couple on the cruise.  The captain came to their table at dinner and gave them a cake as well as a gift.  The whole ship celebrated.

Dave had Alzheimer’s and eventually was unable to care for their home.  Pam and her husband, Mike, lived in Kearney/Holt area.  She wanted them to move closer so she could look after them.  Seeking recommendations for places, she heard about Westbrook from several friends and she knew April.  So in December of 2017, Dave and Marge moved into Westbrook. Dave’s health continued to decline and he passed away June 1, 2018.

Marge has continued being involved in activities. She enjoys the various church services. She says it’s nice having services here and not having to get out in the weather.  She likes the different activities especially the gospel music and Wii bowling.  She has made several friends she enjoys going to activities with and just being able to sit and visit.

Besides her three children, she has two sons-in-law (Mike and Roger), four grandsons, three granddaughters, fifteen grandchildren with one more on the way and four great great grandchildren.