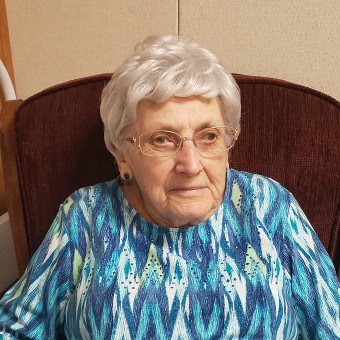 Ursal was born to Ernest and Viola Currier in Summit, SD. She grew up with three siblings: Wilbur, Virgil and Leora. Her father was Methodist minister and got transferred every three years. Growing up she lived in White Rock, Layola and Selby; all in small towns in South Dakota.
School was just something that Ursal did. She didn’t give it much thought one way or the other. She was active in church and even sang in the choir as she got older. Growing up they spent a lot of time outdoors. In the summer, they plays all kinds of games outdoors like Kick the Can and in the winter, it was lots of ice skating and bobsledding.
She graduated from Selby High School. She worked for a year with the FFA. She then attended business college in Bismarck, ND. It was a six month program that taught shorthand, typing and bookkeeping.
Her first job was in the business office of a hospital in Mandan, ND. She then went to work in an insurance office in Souix Falls, SD.
During World War II, she took several temporary jobs on various military bases including as far away as Spokane, WA. Between every assignment, she would return home to South Dakota.
Her sister was moving to Knobnoster, MO. Ursal rode along to help her. She liked the area so much she stayed. She got as job doing bookkeeping in the warehouse on the military base. While in Knobnoster, she took the Civil Service Test and got on that list. The base closed down and Ursal once again returned to South Dakota.
She was notified of a job at the VA hospital in Excelsior Springs. She interviewed for the job and got it. She lived in the Nursing quarters and ate in the nurse’s dining room. That is where she met Robert Leiter, a cook who was attending railroad school. They dated about a year and married in early 1948.
He graduated from RR school and they moved to Wamego, KS. This is where their son, Robert, Jr. was born. They soon relocated to Topeka, KS. Ursal worked mornings at a wholesale liquor warehouse and Robert worked second shift.
Robert was in the inactive reserves but in 1950, he was recalled to active duty. He went to Korea for thirteen months. Ursal and Robert, Jr., went to live with her parents in South Dakota.
The young family moved to Hays, KS after his tour of duty. Their children, Cynthia and Kenneth were born there. Robert attended Fort Hays State University and graduated with a Business degree. Ursal worked at the college in News and Publications doing offset printing and mimeograph.
The Leiters relocated to Excelsior Springs, MO, when Robert got promoted to dispatcher. Ursal worked at McCleary’s, then City Hospital before getting hired at Liberty Hospital. One parent was almost always at home. The kids were active in sports. The family liked going to Royals’ games and to Starlight Theater.
Ursal retired in 1985 thinking she’d have about three years of freedom. However, that was not to be as Robert decided to retire two weeks later. The couple became very active in horse racing. They traveled to Arkansas, Omaha, and Lexington, KY. They even visited the Derby once. Ursal also volunteered at an after-school program and at the Excelsior Springs City Museum.
Robert was diagnosed with Alzheimer’s. Ursal took care of him for several years before having to move him to a facility when he could no longer walk. He passed away in May 2007.
Ursal remained in their house until she couldn’t drive due to macular degeneration. She moved to Westbrook in August 2019. She loves the friendships she has made. She says the staff bends over backwards to help. She loves the fact that she doesn’t have to cook or clean. And most importantly, she feels safe here. She also enjoys playing cards like Hand & Foot, SkipBo and Kings in the Corner.
Ursal lived through the Great Depression, the Dust Bowl, WW II, Korea, 9-11 and now a pandemic. Of all of these, she says the worst was the Dust Bowl. She says you can’t begin to imagine what it was like. You had to have lived through it. The dust was so thick that you couldn’t drive at times and there was no way to get it all out of the house. The fences were buried under dust. She remembers the red dirt of Oklahoma making its way to South Dakota. Then there were the grasshoppers, huge clouds of them swarming together. They would descend on a field and in ten minutes the field would be stripped bare. She says that if you live long enough, you’ll see everything.
Ursal enjoys her family. Besides her three children, she has a son-in-law, a daughter-in-law, two grandchildren and five great grandchildren.